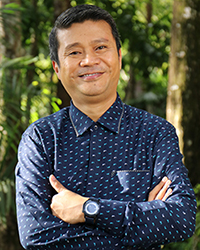 Endrico Gentile was born in the Philippines. He graduated from the Adventist University of the Philippines in 1997 taking up Bachelor of Science in Nursing and passed the Licensure Exam in 1999. He has more than 17 years of hands-on experience in treatment and rehabilitation of clients with substance use disorder.

Endrico started working as a Psychiatric Nurse in a private drug treatment and rehabilitation center in the year 2000. In 2002, he was promoted to be the Program Director in that same facility. Since then he facilitated and monitored the daily operations of a drug rehabilitation center. In the beginning Endrico was utilizing the Behavioral Modification Program through the Therapeutic Community and eventually incorporated the Cognitive Behavioral Therapy in my facility.

Endrico attended several trainings in Addiction Counseling organized both by private and government agencies. He attended the First Training on Drug Treatment and Rehabilitation, and After Care, conducted by the Bureau of International Narcotics and Law Enforcement Affairs by the US State Department and by the Colombo Plan which was held in Bangkok, Thailand.

Endrico conducted several hours in counselling sessions, psycho-education, group dynamics, and process groups. He gives priority to relapse prevention and after care planning. It is important for him to be compassionate with his work and with his clients so he can be an effective counselor for them.

Learn more about DARA’s world-class drug and alcohol treatment. Contact one of our therapists today.
+66 8 7140 7788