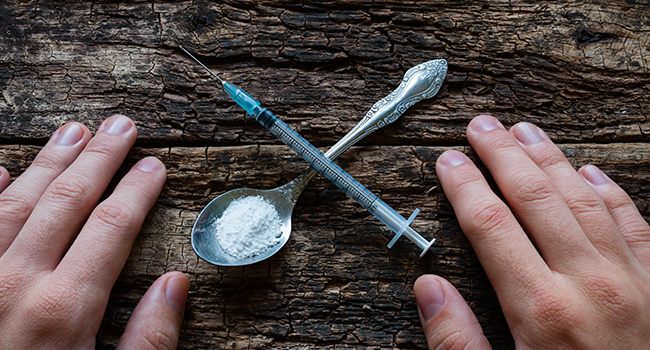 Heroin is a legend amongst the many illegal drugs men and women the world over use on a regular basis.

It is also right up there with the most feared drugs in the world in terms of its addictive qualities and the damage it does to people’s lives, yet there are some users who claim ‘Horse’ can be enjoyed on a regular basis without the shadow of addiction ever being cast.

These people are known as ‘chippers’, so let’s take a look at what ‘chipping’ is all about, and also put some counter arguments as to why such an approach to heroin use is at best a risky pastime.

This is the term given to people who use heroin on an intermittent basis. The fundamental ‘rule’ of chipping is to set a schedule and only use the drug based on the strict agreement you have made with yourself.

Examples of such schedules are using the drug once or twice a week only, or being on it for 8 hours every 3 days.

The principal behind such schedules is that if this timetable is adhered to the user is confident they are not, and will not become addicted to the drug.

The reasoning behind this type of heroin use:

There are many who claim this type of ‘rule enforced’ heroin use work and that they are taking just enough of the drug to enjoy it, but not enough to become addicted, or to feel any withdrawal symptoms when their ‘Smack Session’ experience has faded into the glowing past.

Many maintain that chipping should be done in the same environment on each occasion and it is important they are mentally ready for the experience.

This means there should be no ‘shooting up in unfamiliar galleries’ with those who are well down the heroin addiction trail, and their frame of mind should be one that prepares them for the experience they intend to enjoy.

Another factor that chippers use in their defence of this type of use is admirable, but debatable as to how achievable it actually is.

They claim that if this type of regular use starts to play on their mind and becomes ‘moreish’ then they will immediately cease use, and avoid using again until they feel the time is right.

It must be said that while the principle of the last statement sounds fine it may be much harder done than said.

As millions have found to their cost, simply walking away from heroin is not so easy in practice.

The other side of this coin are the many who state that anyone who is a chipper is really a person that is dependent upon heroin but refuses to admit it. Their argument is that if someone can do without heroin for extended periods then why do they need to keep revisiting the experience.

They will also point to the argument relating to heroin and its highly addictive qualities. If a person uses heroin on a regular basis there is a very strong chance that they will build up a tolerance to the drug. This tolerance means that over time they will need more of it to achieve the same high as previously experienced.

It stands to reason that if someone is continually increasing the amount they use that dependence and addiction become a very strong possibility.

Why take the risk?

Regardless of which side of the fence you are on regarding chipping it would seem a risky ‘game’ to play. A well-used, but very true statement is the fact that no one begins taking any recreational drug with the intention of becoming addicted.

There are millions of men and women who have found to their great cost that addiction can quickly take over a life. This is surely proof that while you certainly have no intention of becoming addicted the choice can be taken out of your hands due to the strength of cravings developed for your drug of choice.

If official statistics are to be believed, then dabbling with heroin is a very risky business. The levels of purity vary from batch to batch purchased. This leaves a user wide-open to an accidental overdose.

Health issues relating to the dilutants, adulterants, and in many cases sharing needles is another major factor.

These and many other potential problems should highlight a very important fact: Even taking into account the legendary ‘highs’ heroin can offer it does not make the risks involved worthy of seeking such an experience.