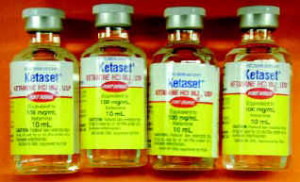 Ketamine is a Class C banned substance in the UK that is to be reclassified as Class B, which will call for more serious penalties for users. It is a general anesthetic used to produce loss of consciousness during surgery. Because of its dissociative quality, it has a following among drug users and is especially popular in the rave and club scenes.

Its street name is “Special K” (or “Vitamin K”) and it is often adulterated with other drugs. At high doses, it can cause hallucinations and delirium.

The dangers of Ketamine include

Most Ketamine on the street today has been diverted from legitimate use in veterinary clinics. There are online advertisements for Ketamine by mail order, but the likelihood of its being pharmaceutical grade or even real is minimal.

Users have called Ketamine “stupidity in a vial.” The label on Ketamine vials has this revealing warning: “For use in cats and subhuman primates only.” Hopefully, the reclassification of this drug will reduce its availability and abuse.