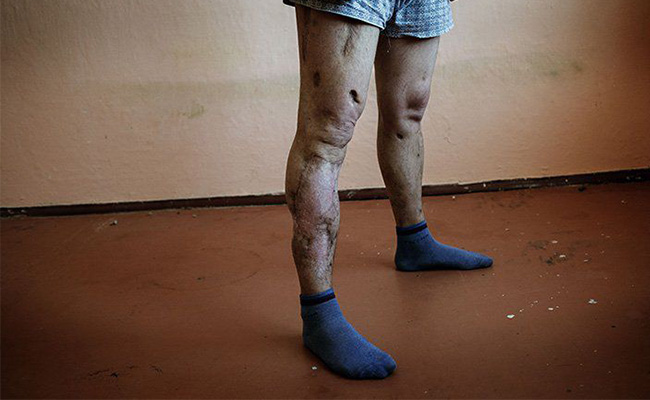 A devastating drug is sweeping Russia and taking out addicts one by one, but not before bringing about a slow, painful, flesh-eating death. Desomorphine, known by its street name krokodil, delivers a very powerful high similar to that of heroin. It is highly addictive. Many addicts use the drug just once and they are hooked.

Krokodil is a very toxic and dangerous drug that gets its name because it produces dark, scaly patches of skin on the user that resemble that of a crocodile. It is made at home by cooking codeine, paint thinner, gasoline, hydrochloric acid, iodine and the red phosphorous from matchbox strike pads. Because codeine is sold over the counter in Russia and the other ingredients are easy to obtain, making krokodil is easy for those who know how to whip up the concoction. The liquid produced by a batch is injected using a needle.

The drug hit the scene in Russia in 2002 and has since spread across the country. It’s no secret that heroin is a major problem in Russia, but it is quickly replacing heroin as a drug of choice among users. The drug has a more powerful high, which lasts between an hour and a half to two hours, and it costs about a tenth of what heroin costs.

The Negative Effects of Krokodil – The Drug Is Extremely Dangerous

Krokodil is so toxic, it actually creates a flesh-eating disease among those who abuse the drug. The drug eats away at the skin and creates terrible abscesses. It also causes teeth to rot and fall out and it attacks the liver and other internal organs.

This is not surprising when you consider the ingredients. Anyone who ingests gasoline, paint thinner, and red phosphorous is signing their own death warrant. In fact, the life expectancy of those who abuse krokodil is one to two years. Also, many people who abuse krokodil share dirty needles, which increases the spread of diseases like HIV.

Withdrawal From Krokodil Is Extremely Painful

Once someone has been using krokodil for even a short time, they will go through the excruciating process of withdrawal if they try to stop taking the drug. While heroin withdrawal lasts about one to two weeks, withdrawal from krokodil lasts from four to six weeks and it is unbearably painful. Most users will quickly return to the drug to be relieved from the withdrawal symptoms.

Medical Withdrawal Is Recommended For People Addicted To Krokodil

Those who are addicted should not attempt to stop taking the drug on their own. Withdrawal from this drug is not only extremely unpleasant, it can be deadly. A professional medical detoxification is recommended for people who want to stop using this deadly drug. A medical detox happens in a medical facility or an inpatient treatment center where medications are administered and progress is evaluated.

If you’re addicted to krokodil, get help now – before it’s too late.