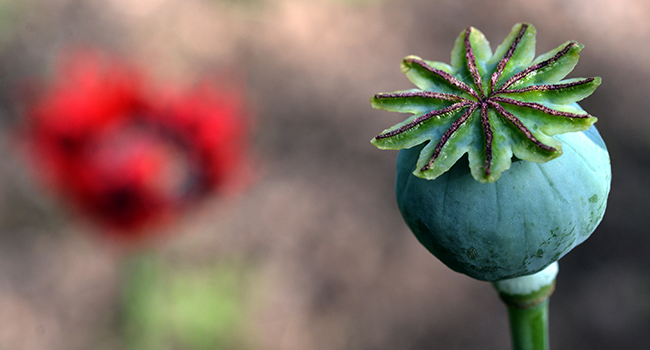 Opium has been referred to in many different ways. As with most “wonder drugs”, it was also once praised and even worshiped as the cure to all ailments, a panacea. Opium today is deemed and regulated as a class A drug, right next to meth and cocaine. So what really is Opium? How did we as humans began using it and what dangers does it still pose to us in the 21st century?

Poppy – a very beautiful and seemingly inconspicuous plant. While many will freak out about that poppy seed bagel you had for breakfast, rest assured, you are not on your way to addiction. Poppy seeds consumed as food has only trace amounts of the active ingredient that provides the historically revered result and effects. The latin name of the plant is Papaver but only the Papaver Somniferum sub-species of poppy plant is used to produce opium drug. Much like with hemp and cannabis, which are essentially the same plant, yet cannabis contains active THC and cannabinoids while hemp is devoid of these and is used as animal feed and in the production of hemp fibers, which are further processed in clothing, ropes and many other useful items we use every day.

Opium is an exudate extract from seed pods of this specific opium containing poppy type. People have been growing and using poppy for a millennia, speculated as far as 30,000 years ago by our Neanderthal forefathers. The first time the plant is referred to in writing, however, is in Sumerian texts some 4,000 years ago. It was called “Hul Gil” – plant of joy.

Homer, the great Greek philosopher, and author of The Odyssey depicts its use very aptly.
In this part of the epic Telemachus is sad and depressed because he is unable to find his father Odysseus. To cheer him up Helen has a “happy thought”.

“Into the bowl in which their wine was mixed, she slipped a drug that had the power of robbing grief and anger of their sting and banishing all painful memories. No one who swallowed this dissolved in their wine could shed a single tear that day, even for the death of his mother or father, or if they put his brother or his own son to the sword and he was there to see it done…”

So what happened? Why did Hul Gil, the plant of joy turn into such a menace? Prescriptions and easy of access. It is far more complicated than just that, but it sums the current situation up quite nicely.

Back in 4,000 B.C., Sumerian apothecaries could never dream to cultivate and extract opium of the same quantities and potency as modern centrifuges and chemical purification does. It was a precious and rare commodity, carefully guarded and hard to come by. Definitely not something an average Sumerian farmer could simply acquire all by himself. Opiates have been used in their crude form for a long time, however back then it was so weak that it was hardly the drug we all know and fear today.

A recent study “Trends in Medical and Nonmedical Use of Prescription Opioids Among US Adolescents” reveals that during the period of 1976–2015 majority of opioid addicts are a direct result of a liberal approach to prescription drugs, opium-based painkillers in particular.

Many falsely believe that opiates are a safe way to get high, just because they are prescribed by a certified doctor and the drug itself is factory produced and carefully measured and has not been cut or diluted. This could not be further from the truth. Just because a drug is convenient to use and prescribed by a doctor does not mean it is any less dangerous or addictive. The problems begin when the user deviates from the doctors prescribed medication schedule. One more extra pill here and there, and before you know it, you need a refill a week before it is due and you feel like you will jump out of the window if it will not be fulfilled. A very large part of heroin addicts are where they are today just because they had a painkiller prescription that got out of hand and when the legitimate access to opiates was denied or cut off, they felt like they had no choice but to turn to illegal sources.

Join us again in our next article where we shall delve deep into the world of opiates, their most popular and legally prescribed variations and how addictive can they really be.