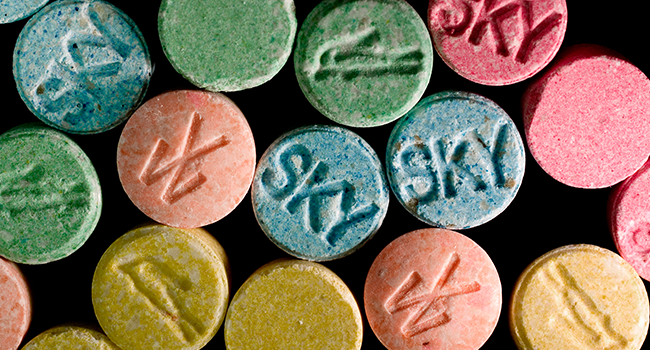 The molly drug phenomenon continues to sweep the young, party going, concert going, clubbing crowd with many users believing the tablet or power they are taking is pure MDMA with its purported associated social ‘benefits’.

If you are of this mindset, please think again. We will touch on why later in the article, but let’s first take a look at the history, the effects and the constant rise in popularity of this drug.

What is in a name?

As with all recreational substances the molly drug has established a host of nicknames. Just 10 of these are X, E, or XTC, Disco Biscuits, Dancing shoes, E-bomb, Hug Drug, Smartees, Vitamin E or Vitamin X. Rest assured there are many more. As and aside, the nickname ‘Molly’ is understood to be an abbreviation of ‘Molecule’.

Virtually Dormant for more than 6 decades:

The German pharmaceutical giant Merck patented MDMA in 1913, although no ‘use’ was stated on the patent, it is understood it was to be marketed as a weight loss aid, however this plan was shelved and Merck had nothing more to do with its promotion.

Fast forward to the early 1980’s when MDMA came to the attention of “The Godfather of Ecstasy”, the renowned American chemist Alexander Shulgin who ‘re-discovered’ its mind altering properties and pioneered research into its use. It has to be said he also researched, created and experimented with hundreds of other mind altering substances, and was certainly an expert in this field.

MDMA was officially banned in the United States in 1985. The DEA placing it on Schedule 1 which meant it could not be manufactured, used on prescription or further researched.

Where there is money you will always find a market, and the molly drug as it is now popularly known began being produced in illegal laboratories throughout the western world.

While the earliest laboratories may well have used pure MDMA this has long since been replaced by ingredients that can potentially do you more harm than good.

Obviously, such a market needs a ‘glamourous and safe’ image and these illegal drug peddlers have certainly continued a very effective ‘marketing’ programme. So much so that many current users think they are getting MDMA when in fact there are no traces whatsoever in the pills and powder illegally produced.

Please do not think the individuals involved in the production and distribution of such illegal substances have your health at heart, it is your wallet they are after!

Due to the imagination of the illegal manufacturers there is no such thing as standard replacement ‘ingredients’ for MDMA. Indeed that molly drug you have just purchased will in all likelihood contain:

. Substances with psychoactive properties that are designed to mimic MDMA effects such as “Sass” (MDA – Methylene-dioxyamphetamine).

. “Bath salts” (this is a generic term for a class of amphetamine-like stimulants known as synthetic cathinones).

. Stimulants such as caffeine, methamphetamine, amphetamine or cocaine.

. More rarely used, but have been detected are anesthetics such as “Special K” (Ketamine) or “DXM” (Dextromethorphan, which is used in over the counter cough medicines).

So, as you can see, you are generally not getting what you think you are paying for.

For the young users reading this article, this section will probably seem complete overkill, but the fact is, if you are risking your health for a good time, surely it would pay to know exactly what your latest drug date consists of.

This can be achieved with the use of self-test kits. While no such kit can provide evidence of the quantity or quality of certain ingredients contained in the drug in your possession it does indicate the presence of various substances. This is achieved from scraping the drug and dissolving it in the solutions provided with the kit.

This is surely worth consideration, because as has already been mentioned; the producers of such drugs do not have, and never will have your health, or the possible detrimental effects their product can cause at the heart of their ethos.

The truth is, in the vast majority of cases, whatever is being put into your pill seems to do the trick. Testimony to this is the continuing and consistent popularity of such drugs. Particularly at Raves, Concerts, Clubs and All-night parties.

Users describe a feeling of euphoria, they are more confident, open and accepting, indeed many report feeling at ease and unafraid. Regular anecdotes confirm users feeling totally connected to those around them.

These feelings are undoubtedly enhanced and stimulated due to the visual, sound, touch and smell sensation such environments bring. This adds to the feel good factor and encourages users to lose many inhibitions. They feel the urge to dance, talk incessantly and prone to being much more ‘touchy, feely’.

In terms of drug use where there is an up, you are guaranteed to find a down.

During and after a molly drug experience many users report unstoppable jaw-clenching, tooth-grinding, chills or sweats, muscle tension and even faintness.

A common sign someone is on a ‘trip’ can be seen in the dilation of their pupils, and their inability to stay still for any reasonable period of time.

It is far too simple, and in all honesty, very condescending to state that you should not even consider taking that molly drug your friends are raving about. It is however, very wise to know what you are letting yourself in for, what risks you are taking and how it could affect you.

We have all seen the headlines “Ecstasy Kills”, and in a small number of cases it does, but let’s be honest; even one death is one too many.

If you are determined to swallow or snort something that could harm, and that is illegal, which could lead to a whole set of law enforcement headaches, then at the very least be informed, avoid mixing your ‘hit’ with alcohol or other drugs and make sure you keep your body well hydrated.