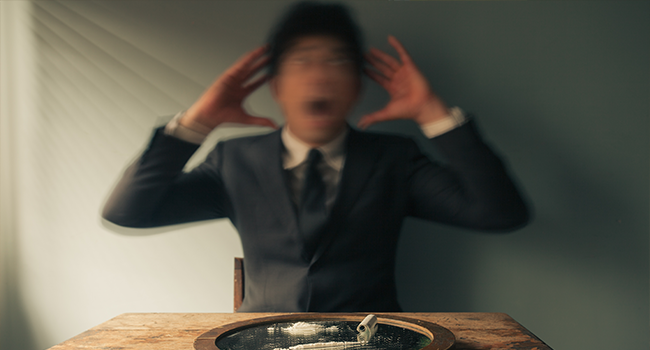 Those who use and abuse illegal substances are literally on a journey that can take just three steps to drug rehab.

We will look at each in turn, but first let’s consider a common misconception amongst those who are regular drug users:

Addiction – It will NEVER happen to me:

If only this were true. Clearly no one who begins using drugs is in it with the intention of becoming addicted. They are in it for the hit, the buzz, the high and the absolutely cracking feelings that certain illegal substances offer.

Unfortunately in the drugs world you get nothing for nothing. Regular users rapidly discover that where there is a high, there is a double low.

The more regular your drug use and the bigger quantities you load for each hit mean one thing. The stronger your dependence upon drugs become.

This is due to something that many do not realise. It is how quickly your body and mind take to these substances. They do so with an enthusiasm and hunger that is frightening.

Once you are into regular use, you need more of the same just to achieve the same high as previously experienced, and this vicious circle continues until you are well and truly hooked.

Let’s take a look at where it all begins:

When you start dabbling with drugs it is fun, you have a good time with like-minded users and use is generally sporadic, but before you know it, taking your drug of choice moves from irregular use, or only on ‘special occasions’ to far more regular use.

Perhaps you have a toot after a long day at work to ‘de-stress’ and before you know it this becomes a daily ritual, some will reach for the pipe after an argument or because they are having a hard time in a relationship.

In such situations drugs become your crutch. Something to lean on and escape the problems surrounding you.

When you discover that the drug you are using is not really doing it for you anymore then the natural progression is on to something stronger.

Initially this more than does the trick, but herein lies the problem. Regular use of this new, potentially far more addictive drug works in a similar way in relation to dependence.

Your mind and body begin to crave it, but not in the same amounts or at the same regularity. To feed your ever growing habit you need to consume more of the drug and use it on a more regular basis.

Although you realise you are using drugs on a far too regular basis, you refuse to admit this to yourself or those closest to you.

The saying “The truth hurts” has never been more meaningful than when put to a person who knows they are now dependent upon a particular substance, but to date have refused to acknowledge such facts to themselves.

Have a look at the following signs that are clear pointers telling you that drugs are now in control of you rather than the other way around.

Those who relate to such signs really must hold their hands up, admit that their dependence upon drugs is something to be taken seriously and just as importantly they must seek professional help for their drug addiction.

. Has the quantity of each ‘blast’ you prepare increased steadily over time?

. Has the time frame between each hit decreased steadily over time?

. Are you considering trying a stronger drug, or have you already switched to something that promises a bigger ’high’?

. Rather than smoking, snorting or swallowing your swag are you considering, or have you already switched to injecting?

Before we finish off with the final stride on your three steps to drug rehab, please also consider if the following relates to you:

Are drugs constantly on your mind? Do drug thoughts surface quickly once you wake up? Do such thoughts keep resurfacing throughout the day, and follow you into what is generally an uneasy sleep, or a stupor that has been brought about by excessive drug taking?

Many will constantly think about the amount of stash they have left, when their next ‘hit’ is due, and will subconsciously replay in their mind future plans for their next score.

There is a good chance that a contingency will be in place regarding substitute suppliers. This is purely to counter the unlikely event that their ‘main man’ is dry or otherwise indisposed.

Such thoughts are not healthy and they must tell you that your dependence on drugs is reaching a critical stage.

The final step in your journey to seeking professional help with your drug addiction issues is one which is not easy, but is one you must take.

You have to stop denying that you have a serious issues in terms of your drug use. Admit to yourself that drugs are in control of you and not you in charge of them.

This is a very difficult thing for many who are dependent upon drugs to do for one major reason:

This FEAR is a deep unsettling one of how you will possibly survive without your regular supply of drugs.

While such fear is completely understandable, it cannot and should not prevent you from taking the brave step of admitting to yourself the extent of your problem and to seek urgent professional assistance.

Routes to consider when seeking help:

There are several routes to consider when seeking help. These include confiding in your health professional, availing yourself of the services provided by a local outpatient rehab centre, or opting for a far more positive approach.

This approach has been taken advantage of by many recovering addicts. That route is to spend time in a respected residential rehab establishment, with the serious thought of opting for a stint at a luxury overseas rehab resort.

Don’t wait for the next step:

It is imperative that whatever stage of the three steps to drug rehab you are at that you seek professional help. If you do not your next step could be terminal.