Most alcohol studies are reliant on the participants to self-report how often and how much they drink, which at times, can result in undependable data. Biomarkers based on indicators in bodily fluids, including blood, are objective measures of the use of alcohol. Biomarkers can work in different ways; firstly they can detect toxic effects that alcohol can have over a prolonged period on bodily organs and body chemistry, indirectly indicating alcohol abuse. Other biomarkers can measure directly if a person has been drinking recently by measuring alcohol components in the body after it has metabolized.

Biomarkers have many uses, including objectively showing that a person has abstained from drinking alcohol, as well as screening for possible alcohol related issues in people who are not providing accurate self-reports.

However, there are some limitations to using these biomarkers. Certain biomarkers are not as accurate when it comes to certain groups; for instance, younger individuals and women. It is also often difficult to interpret how much and how long someone has been drinking. Because of these limitations it is often advised that biomarkers and a self-report be used in conjunction with one another.

But what if there was a tool available that could provide perfectly accurate data about an individual’s drinking habits?

This is what the National Institute on Alcohol Abuse and Alcoholism (NIAAA) is hoping for and is once again challenging the biotech community to develop a wearable device that can measure the amount of alcohol in the blood in near real-time. Previously the community was challenged to develop a device which uses technology to detect alcohol released through the skin, but this time they are being pushed to come up with a device which is able to measure a person’s alcohol blood level by checking the actual concentration levels in the blood or the interstitial fluid which surrounds the body’s cells. 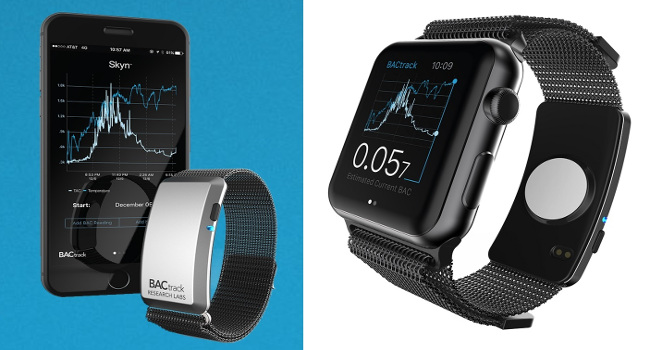 Back in May 2016, NIAAA announced the first winner of their competition. This was won by BACtrack with its Skyn prototype – a wrist wearing device that could detect blood alcohol levels by using a fuel-cell technology. This technology is similar to what police use in their road side breathalysers. In 2nd place was MILO Inc who designed a device using disposable cartridges to continuously track alcohol levels.

“We have learned that there is real interest in the private sector around wearable alcohol biosensors, and that innovation using distinct means of alcohol detection is on the horizon,” says M. Katherine Jung, Ph.D., Director of NIAAA’s Division of Metabolism and Health Effects, and co-leader of the competition.

The new challenge encourages innovation and some creative solutions could include the adaption and miniaturization of certain technologies such as wave technology or spectroscopy.

“We want to continue to harness the power of the private sector, because if alcohol biosensors become a part of the ‘wearable toolbox,’ then tangible new opportunities will become available that can profoundly affect the field of alcohol research,” says Dr. Jung.

In addition to a biosensors potential for professionals and researchers, the devices could also become a tool for consumers who wish to track their alcohol consumption and personal drinking patterns.

Submissions for the competition have to be in by May 15th, 2017 and must include a working prototype

Details about the competition are posted at https://www.niaaa.nih.gov/research/challenge-prize and https://www.challenge.gov/challenge/wearable-alcohol-biosensor/. For more information, please email NIAAAChallengePrize@mail.nih.gov.