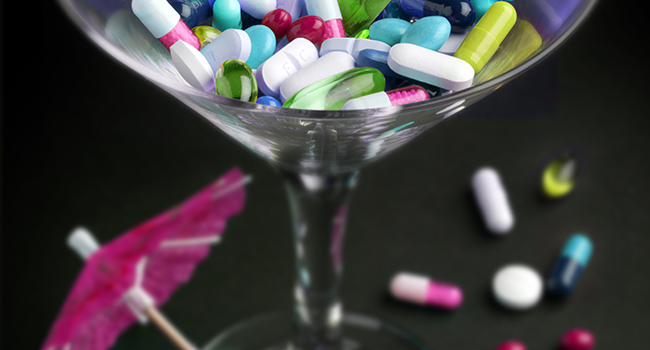 It stands to reason that regular and increased use of a single illegal substance is pushing the door marked ‘Drug Dependence’ open that little further the longer you continue this habit.

Start combining two or more of these substances regularly and you are entering the world of drug cocktails. Such combinations can rapidly become a stamped passport to full blown addiction.

Most of us think of cocktails in terms of mixed alcoholic drinks that taste delightful. To many they have an ‘upmarket’ or tropical holiday aura about them.

Think trendy bars or clubs, a sunbed or lounger on a beautiful beach, the sea lapping gently at your feet and a delicious tasting cocktail complete with ‘umbrella’ in hand.

Such thoughts and images have evolved thanks to the imagination of skilled mixologists the world over. Their combinations can be refreshing, uplifting and enjoyable.

The worst those who have one too many can generally expect is a hangover the following morning. This is far from the case for those who decide mixing drugs is the way to go.

Drug Cocktails – Don’t even think about it:

If you are considering transferring such thoughts and ideas to either taking a combination of different drugs together, or one different drug after another at staged intervals during an extended period of ‘pleasure’ please think again.

These methods of drug consumption are akin to playing Russian roulette with your health, and quite possibly your life.

The reason many users try such combinations is that they are looking for a higher ‘high’, a more rapid ‘rush’, or in an attempt to float away beyond anything previously experienced.

Similar to individuals who like their own company and prefer to avoid group activities, drugs prefer to be on their own. They will do what they are capable of on an individual basis. Start mixing and matching and the results are less than predictable.

Add to this that every individual is different. It is a fact that any two people taking the same drug combination can react differently to such a concoction. Understanding this should make it very clear that this type of experimentation is really not worth the risk.

What is also frightening is the professional medical community are still searching for answers. They do not yet fully understand what short and long term damage is being caused by regular use of drug cocktails.

Matches made in hell in an attempt to get you to drug heaven:

To try and list all drug combinations that are known, concocted and regularly popped, smoked or injected by different groups of users across the globe would be a task in itself.

This is because drug mixologists have active imaginations and a hunger for drug combinations that needs feeding on a regular basis.

Marijuana, Ecstasy, Cocaine and Heroin are all regular suspects when there is a drug combination identity parade, but think of a drug and you can be sure there will be suggestions and street names to couple it with others.

Those who regularly use a single drug of choice are already taking a big enough risk in terms of dependency. Start to experiment with various drug cocktails, or take different individual drugs as your evening/weekend progresses and you are giving yourself a 2-pronged problem. Both could well linger longer than you ever expected.

You are multiplying the potential short and long term health risks by sampling such combinations, and you are encouraging the risk of dependency with repeated use.

Some drugs, particularly from the opiate family are extremely addictive. Please do not go around with the attitude “Dependent on drugs? It will never happen to me”. The reality of such blind experimentation is that it CAN happen to you, and once hooked it is a long road back.

To finish off we will touch on a killer (in more ways than one) combination. In the mixed up world of drug combo’s this one is at the top of the tree and is rumoured to get you completely out of your tree and then some.

What is not a rumour is that it is highly dangerous, highly addictive and quite comfortable in sending you to an early grave.

Speedball – The mother of all drug cocktails:

There have been some well publicised cases of rock stars and actors paying the ultimate price with their life due to Speedballing.

But let’s be clear, these deaths pale into insignificance when considering the amount of ‘normal’ men and women who get much more than they bargained for while dabbling with this potentially lethal combination.

Other drugs can be mixed with cocaine and called a Speedball, but the generally accepted pairing is a mixture of cocaine and heroin taken via injection. The original speedball combination; cocaine and morphine, is still used by some.

It is usually mixed and put into one syringe for shooting up, but some users will put ‘Charlie’ in one syringe and ‘Horse’ in another and empty the syringes into both arm simultaneously.

In terms of actions these two drugs are at the opposite end of the scale. Cocaine is a stimulant, heroin acts as a depressant.

Those who have tried either of these drugs individually will vouch that they offer very pleasant ‘high’s’ on their own.

It should also be remembered that regular use of either in isolation will see a user take the fast track to long term rehab treatment. In the case of heroin addiction such treatment will only be possible if they do not die from an overdose first.

Drug cocktails are tried because the user is looking for a special buzz. Those who have tried a speedball combination report an intense, super-charged euphoria and that the high is way, way up there.

This is because this cocktail combines the effects of both drugs while reducing the negative effects.

Hence regular use of this combination is sought after by those looking for the ultimate high.

What they are not searching for, but it comes as part of the package is that if addiction has not already wrapped its clinging cloak around them, it soon will.

They must also understand that they are playing hide and seek with a fatal overdose and that this ultimate ‘high’ is far closer than many realise.