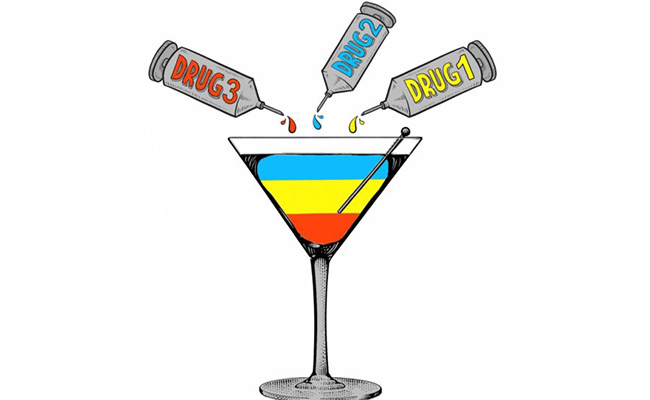 Drug Cocktail – Dabbling with one type of drug on a regular basis is moving a person towards dependence. What begins as occasional use can very quickly move up a gear to twice or three times a week and before a user knows it they are finding any excuse to use daily.

It is very common for users to mix substances in their search for a higher “high”, but entering the world of drug cocktails is a very dangerous thing to do. Drugs are loners by nature. They do what they are supposed to do on an individual basis and are not made to mix with others.

Those amateur mixologists who search for heady formulas and tinker with any illegal substance at hand really need to understand what a mixture of substances taken together can do to a person.

The imagination of those mixing drugs is enhanced by the range of substances, chemicals and additives available, but there are some mainstays that many drug users see as a normal part of the social scene.

These include Marijuana, Amphetamines, Ecstasy, Cocaine and Heroin, and to make matters worse, many taking drug combinations wash them down with alcohol. This really is asking for trouble. If you are determined to use drugs, or to have a night out where excess alcohol will be consumed please don’t combine the two.

We will mention one drug cocktail that many see as the ultimate high. While this may be the case for some it also spells the end of the line for others as their final destination is the morgue!

There are a number of variations and ways to administer this long-established cocktail, but the most powerful and potentially lethal combination is the mixing of cocaine and heroin taken by injection. Although it is true that some users still stick by the original ‘recipe’ which is cocaine and morphine delivered in the same way.

Most speedballers will mix the 2 drugs together, a drug cocktail in one syringe for shooting up, but the more extreme user will fill one syringe with heroin, the other with cocaine and then empty both syringes into the arm simultaneously.

What makes this combo so effective?

The effects of this combination are so telling because the individual drugs come from opposite ends of the spectrum. Cocaine is a stimulant, Heroin a depressant. The dual result is an extremely intense, ultra-charged euphoria that takes the user into their own world, but it must be clearly understood that the dangers of overdosing on such a combination raise the stakes when it comes to a user being taken out of this world permanently.

Addiction at the double:

The other thing that must be realised in terms of cocaine and heroin is that on their own they are highly addictive substances. Once regular use of either becomes commonplace the person concerned is heading towards addiction. To use the two together really is doubling that date with addiction and the very real possibility of suffering a fatal overdose.