Australia has a unique growing problem in the meth related world. Bikie gangs have created a business model of sorts to spread methamphetamines across Australia using Meth labs. The problem is, they are recruiting children to help. In 2015, Victoria’s former police commissioner said that motorcycle gangs played an enormous role in meth being distributed across the country.

This goes even further as biker gangs are locally based and using children to serve as dealers. These children range in age from eleven, sometimes younger, and up. One former child dealer spoke with ABC News to share that he was recruited at age 11 and by age 13 he was smoking meth regularly.  At 15 the gang had already taught him to cook meth, creating enough each day to bring a street value of up to 28 thousand dollars. Though there are obvious dangers in cooking meth, the children were rarely given protective gear or safety precautions taken in these meth labs. The goal is to produce as much meth as possible for the dealers, safety is not a concern as safety measures cost money. Children are sadly replaceable in this world of meth. 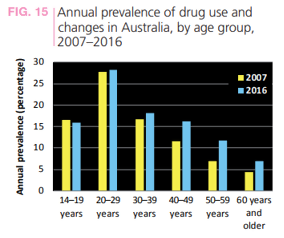 The children recruited were often from broken homes or poverty stricken areas in which the promise of extra money was highly appealing. If this continues, an entire generation of Australians could be lost. Working around, cooking, and using meth is dangerous to your health long term. Even children can develop problems that last a lifetime, such as arthritis, lung damage, and potentially death. Furthermore, as more children and teenagers begin to use meth, crime rates soar as related to use.

The National Institute on Drug Abuse defines methamphetamines as “a powerful, highly addictive stimulant that affects the central nervous system”. Methamphetamines are more commonly referred to as meth, chalk, ice, or crystal, among other slang terms. It tends to come in the form of a white, odorless crystalline powder with a bitter taste that can be easily dissolved in water or alcohol. Meth can be smoked, snorted, or injected with a needle.  Some people take meth orally as well though this is less common.

When someone takes meth in any form, they have a false sense of happiness and well-being. This is accompanied by a rush of confidence, energy, and hyperactivity. The user is unlikely to get hungry which is why many long-term users are thin. The effects can last between six and eight hours, but have been known to last up to 24 hours. Starting with the first use, meth begins to destroy a person’s life.

Signs and Symptoms of Meth Use

If you suspect a loved one, especially a teenager is using meth then seek help immediately. If you are unsure of the signs and symptoms of meth use, they have been shared below. Common signs include:

Of these, meth mouth is the most readily recognized. Many meth users have darkened teeth that will eventually fall out and damaged gums that can easily be infected. There is also a recognizable chemical odor with meth. Though it is most common with those that are cooking, it can also attach to those around areas in which meth is cooked or has been cooked. This chemical odor is why meth labs are moved around so often, to avoid detection. Meth cooking also involves highly volatile chemicals mixed over high heat which can cause an explosion.

A related danger of meth use is increased libido and lowered immune system. These are together because those using are likely to take part in high risk sexual behaviors. High risk sexual behaviors often lead to disease such as Hep B and C, HIV and AIDS. The same disease can come from users who share needles when injecting. These diseases can be deadly, even if one gets clean from meth. This is why early treatment is so important.

Another problem with meth use is even the long-term effects develop within the first few weeks or months of use. These effects are lifelong even if a person does get clean. People struggle to overcome meth addiction because of cravings and a change in brain chemistry. Once the cravings begin, the user gives in and follows the cravings toward repeated use. This is because the brain functioning has been altered in such a way that the body feels it may die without further use. This is part of withdrawal, but tends to lead to further and heavier use over time. Though not much data is available for decades of use because most users do not survive that long, some long-term results are known. These include:

Many users, even after they have stopped, become suicidal because of the side effects of use. Others become psychotic due to the brain chemical disruption. Many also suffer from permanent organ damage to the heart, liver, lungs, and skin. A stroke or heart attack is also likely due to this damage. From the beginning, meth starts to cut the user’s life short.

DARA rehab in-patient facilities can help fight the addiction to meth. The earlier treatment is provided, the better chances of avoiding severe long-term damage. While not all damage may necessarily be erased, it can be lessened. DARA offers an affordable in-patient facility with numerous locations. These include, but are not limited to Melbourne, Auckland, Brisbane, and Sydney. With DARA, each patient receives individual, personalized care for a typical 12-week program, though shorter or longer stays can be arranged. During a typical stay the person is treated mind, body, and spirit before heading home with the tools necessary to stay in recovery long term. You are worth the time and effort needed to be treated at DARA. Call anytime to get started.