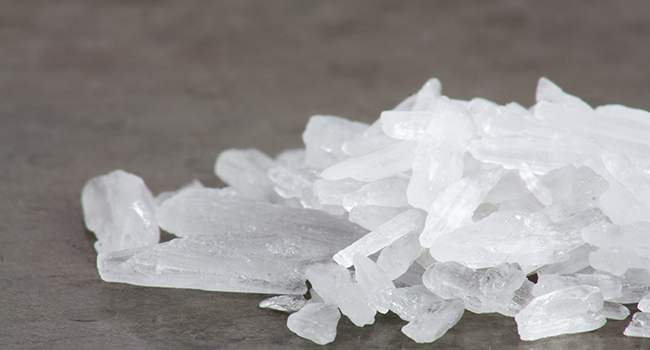 Meth mayhem comes in many forms. Let’s take a look at what the drug is, why you never really know exactly what your latest score contains and the trail of devastation you are potentially blazing.

Meth is short for methamphetamine. Derived from its parent drug amphetamine it has a similar chemical structure, but offers far more pronounced effects. White in colour, it does not smell, has a bitter taste and dissolves easily in alcohol or water.

You won’t find meth manufacturers advertising their wares in directories or with neon signs outside the premises. You will find basement labs and clandestine laboratories galore.

This is a cottage industry that follows no health and safety standards, while certain ingredients are common there is no set recipe, and quality control officers are not on the payroll.

If you knew what It contained would you continue use?

Those who do not care what they put into their body, or what personal physical and mental health problems they create probably do not care, but for those who do, please consider just 5 of the many ingredients that will fuel Meth mayhem:

Acetone: This is used in paint thinner and nail polish remover and is extremely flammable.

Lithium: Used in the production of batteries. If lithium comes into contact with the skin serious burns are guaranteed.

Pseudoephedrine: A very common ingredient. It is a decongestant found in medicines for colds and flu.

Effects and progression into rapid addiction:

Meth is an extremely addictive drug. To emphasise this, consider the fact that when taken it releases a supercharged surge of dopamine that is almost four times the level cocaine offers.

This is the first thing users experience when smoking or injecting meth. Common signs are a racing heartbeat, increased metabolism, increased blood pressure and a rapidly beating pulse.

These symptoms are only the beginning of meth mayhem and can continue for up to half an hour. Just to put this into perspective, that is around 10 times longer than the rush offered by taking crack cocaine.

Let’s be honest, this is the effect that tempts many to try and from this point of view it certainly does the trick.

Feelings of pleasure and a huge increase in confidence blend nicely with unbounded energy. Many feel superior to the company they are in; others content themselves by focussing intensely on something that in the normal scheme of things would be seen as extremely inconsequential.

This high varies tremendously between individuals, and the strength of the batch you have just scored is also a major factor. Users report highs lasting anywhere between 4 and 16 hours.

Due to its highly addictive qualities, and the mistaken belief that taking more will maintain the original high many users commence a meth binge. This binge is brought on by uncontrollable urges to continue smoking or injecting the drug.

Meth Mayhem continues each time a blast is taken. Another rush is followed by another high, but both effects decrease in length and intensity as the binge continues until finally no rush or high is received. As can be imagined this continued use brings on physical and mental hyperactivity in the extreme.

While 3 to 5 days constitute a fairly common binge period it is reported that some bingers go for up to 15 days. You do not need telling that such prolonged use invites serious harm.

The end of a meth binge can also bring on:

This is when a meth user is at their most dangerous. It comes about when taking the drug no longer provides a rush or a high. This results in severe cravings that are followed by immense feelings of emptiness. Paranoia sets in, visual and audible hallucinations are a given, and the user exists in a world which is theirs alone.

Add to this a whole host of devastating effects that include being unable to sleep for days on end, being completely convinced that (imagined) bugs are crawling under the skin, and that self-harm or harming others is common and it becomes very clear that this stage of meth mayhem is something to avoid at all costs.

The body is an incredible, complex ‘machine’, but has its limits. After such a dangerous binge it reacts by shutting down. It does so due to the vicious effects meth is causing. The user will sleep for up to 3 days solid, during which time their body appears almost lifeless.

Meth use is very much like playing a high risk game of chance where the odds of avoiding addiction are stacked heavily against you.

As millions of men and women have already discovered and millions more will do, methamphetamine use is not a game, it is a highly addictive and destructive drug that can rapidly ruin your life.