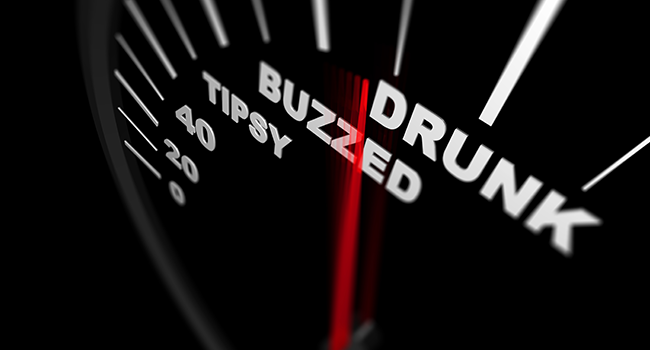 Alcohol is quite a unique substance. It is one of the few rare drinks that our digestion system can absorb almost immediately. Unlike food, it requires practically no digestion and processing before it can be absorbed into the bloodstream. We all know that the more you drink the drunker you get, yet so many people have no idea of their own limits. Since the level of inebriation depends highly on many external aspects, such as whether or not the drinker has eaten anything before or during the drinking, their metabolism, body build and even gender most people seemingly refuse to accept their limits. Let us go over what are the stages of inebriation when it comes to alcohol and what could be the potential outcome should the drinker continue to drink. Also keep in mind, that we are talking about stages of inebriation and not the stages of alcoholism, as in – this refers to alcohol consumed in one sitting and does not delve into the depths of long-term alcohol abuse.

In this stage, the drinker is getting a bit “tipsy” as people affectionately call it. Often described as slight dizziness similar to when a person stands up too fast. A mild euphoria floods the body, inner barriers shrink and inhibitions decrease making the person more talkative and seemingly more self-confident resulting in countless youtube videos that start with “hold my beer, check this out”.

Fine motor skills and coordination becomes questionable at this point. Time seems to flow slower and reaction times delayed. Impaired cognitive and decision-making processes. All of these combined usually result in spontaneous, dangerous, illegal or socially unacceptable behavior as the drinker is flooded with various “genius” ideas.

At this point, the drinker is no longer experiencing fun and is definitely not fun to be around. At this point, the person also becomes extremely emotional and can become easily offended and even aggressive. Inability to string together coherent sentences and impaired vision further puts the person at physical risk. Nerve sensitivity is reduced and results in dulled touch and pain responses. Relaxed muscles, mostly due to delayed body response to external stimuli. There have been countless accounts of drunk people surviving an accident of some type just because they did not or rather, were unable to tense up and thus minimized injuries like broken bones, pulled tendons and ripped muscle tissue. That said, the alcohol inebriation that saved you from those injuries also placed you in the position to be injured in the first place, so getting drunk before you hit the slopes on your snowboard is definitely NOT a good idea.

This is the stage where your body is actively fighting the alcohol poisoning that it is experiencing, albeit with reduced effectiveness. This is the “end of the night out” stage with your friends. The drinker usually is so inebriated that their motor skills are shot to pieces and they are barely able to crawl, let alone walk. Vomiting and passing out on the curb is a normal bodily response at this stage. Likewise, if the constitution of the person allows for their bodily functions to persevere despite the intense intoxication, very few people actually remember anything after this point.

Should the drinker continue drinking despite his body actively protesting, very grim things happen indeed. At this point, he is so drunk that your body is beginning to fail. Heart rate, pressure, and body temperature falls, resulting in shallow breathing that results in passing out completely and slipping into a coma.

A human stomach can hold a very large amount of liquid. If the person drank large amounts of alcohol and filled it up right before stupor and coma stages, there is a great risk of respiratory system arrest and consequently – death. Most people survive this by getting their stomachs pumped at the ER, should they be found unconscious and still alive, then delivered to the emergency room. If a person reaches this stage of inebriation alone and is not found in time, he will die as it is impossible for him to seek out help himself, since being in a coma puts you at quite a bit of a disadvantage when it comes to that.