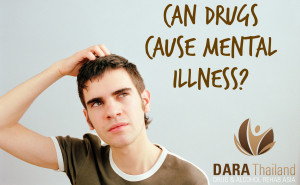 Drug addiction and other mental illnesses can be co-occurring disorders, and it is often the case that one causes the other. If an underlying disorder such as depression or anxiety is a pre-existing condition, substance abuse may develop in response. The person may find relief in self-medication and, upon repetition, not only develop a dependency but also exacerbate the original problem, resulting in what is referred to as comorbidity.

On the other hand, where there is no pre-existing condition, but drug experimentation elevates to abuse and dependency, the long-term effects of the drug being used can result in the emergence of other types of mental illness, ranging from moderate to severe.

Most studies indicate a clear correlation between amphetamine use and acute psychosis. Although in many cases the condition is resolved by abstinence, in others there are spontaneous relapses (of psychosis). “Flashbacks” to prior psychotic episodes can be triggered by stress. As not all amphetamine abusers experience psychosis, it is unclear whether the syndrome is caused by the drug (or by the associated lack of sleep, hydration, and nutrition) or an underlying, pre-existing tendency is being triggered by the drug.

There is evidence that marijuana can induce psychosis, and hallucinogens such as psilocybin and LSD can trigger episodes, although these latter substances are not considered addictive. Extended heavy marijuana use can more likely promote depression, but abstinence, aided by treatment, can ameliorate or even eliminate the effects.

Long-term abuse of alcohol can produce a number of mental-health problems, including depression, anxiety, paranoia, phobias, and suicidal tendencies. Whether or not these conditions were pre-existing, perhaps at sub-clinical levels, alcoholism can, over time bring about the full expression of any or all of these problems to the extent that dual-diagnosis is appropriate for treatment. As most current alcoholics also abuse drugs and most drug addicts abuse alcohol, the likelihood of another mental health condition arising is high.