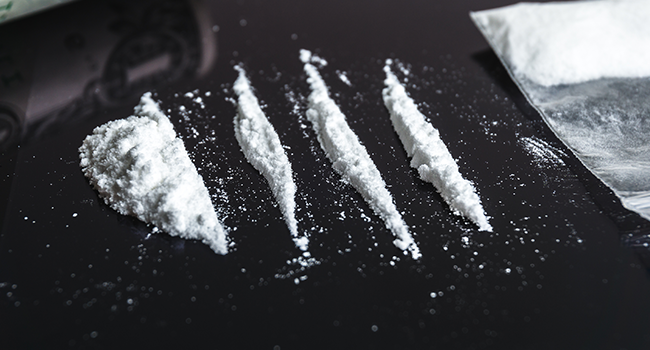 Cocaine has a ‘designer’ aura about it, it is seen as fashionable and often touted as the perfect party drug.

Anyone with such illusions needs to understand that it is also one of the most highly addictive drugs on the planet!

Derived from the Coca leaf there are 3 main ways in which cocaine is sold on the streets:

Crack – The Poor Man’s Form – Don’t you believe it:

This is cocaine in crystal form. It is purchased in solid rocks or crystals and colour can vary. Most commonly seen are shades of yellow, white or a pale rose.

Users heat the cocaine to smoke the vapour. As it heats up it gives off a cracking/popping sound, hence the name.

Not only is this the purest form of cocaine on the streets it is also the most addictive, and it is far stronger than powder cocaine.

The effects of smoking Crack are magnified because it hits the brain almost immediately. Many users report an absolutely cracking high. The problem is that this euphoria is very short lived and in general last for just a quarter of an hour

Due to its extremely moreish appeal, as long as a user has a stash or can obtain more by hook or by crook they will do everything in their power to keep their habit fed.

Cocaine in powder form is expensive, but to entice new users Crack is sold on the streets for very low prices. This all sounds great for the user; however, the street merchants already know just how addictive it is and that their customer will very quickly be seeking them out for more.

This never-ending need to support a growing habit means that before long the amount spent on this form of the drug becomes outrageous.

Freebase – Another form of Crack!

This is powdered cocaine that has been treated with chemicals. This process frees the base cocaine, hence the name. The finished form can then be heated at lower temperatures and smoked.

In reality it is a form of Crack and similar to it’s more potent sibling it reaches the brain extremely quickly. The need for more is also exactly the same as is the potential for dependence. Put plainly, users simply cannot get enough.

Powder – The most popular and expensive form:

This is far and away the most popular form of purchase. The user buys cocaine in powder form with a few small crystals thrown in, they crush it with a credit card or similar implement, chop it into lines and then using a straw or rolled up banknote snort it through the nose.

This form of use takes a little longer to reach the brain, and while not as immediately addictive as Crack or Freebase, it very quickly becomes something users cannot do without.

So, what’s the buzz?

With its highly addictive qualities there must be something to the buzz that drives millions upon millions of men and women to use it on an all too regular basis.

And there certainly is something! This highly powerful stimulant gives a very pleasant high with feelings of euphoria, users feel that everything is right with the world and generally bursting with confidence.

Another aspect of the buzz is that it lowers inhibitions. These lowered inhibitions are seen in an “anything goes attitude”. This is particularly the case in terms of sexual openness for many men and women.

As can be seen, in all forms cocaine gives an exhilarating high, however it is a short lived one. This has users hurrying back to the cocaine trough of their choice on an all to regular basis.

The added problem is that their body and mind take very quickly and easily to the feelings and demand a regular supply, but not a supply that stays constant.

A user quickly builds up a tolerance which means they need to take more on a regular basis just to achieve the same high as previously attained.

This regular increase in tolerance and the associated increase in the amount required leads to deep dependence issues that are very difficult to overcome.

No substance is worth the heartbreak cocaine can bring:

It is no exaggeration to state that cocaine has ruined millions of people’s lives. Far from the glamour tag and happy party people it is associated with it can cost you your relationship, family, job, home and in many cases your life.

Don’t believe the hype, tell Charlie you have no time for him.