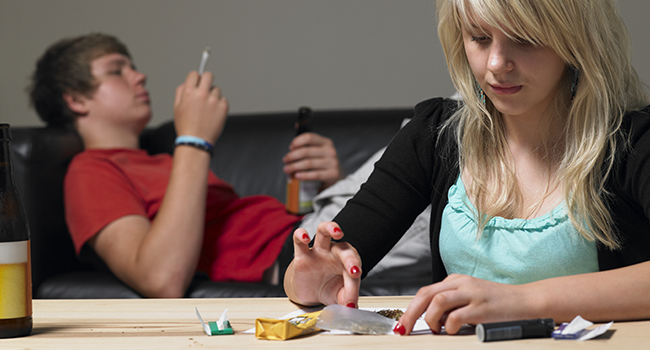 We all know about alcohol. Most know about other types of drugs, popularized over the years by television, cinema as well as rock and pop music. Cocaine, heroin, meth – all words that most people know and understand to be drugs. Less than a hundred years ago, these words would be more common in medicine and healing topics but have since been dethroned due to further studies in their damaging side and after effects.

What is the first thing that comes to mind when mentioning cold medicine? How about hand-sanitizer or even nutmeg? These and many more regular everyday items are being abused for their mind-altering properties. Usually experimented on by kids who would otherwise have a hard time getting their hands on more recognized drugs.

Is it ok to drink bleach? No, of course. Everyone knows that, right? But what if drinking bleach would make you high? The answer would still be a resounding “no”, at least to a sane person, but there are many other household items and chemicals that can and are abused to get high. Even granddaddy of all drugs – alcohol is abused in new and rather genius ways, most usually by children, specifically teens.

It is impossible to outlaw everything. There are only so many things we can put behind locked doors and deem them unsafe. Dishwasher liquid if consumed will earn you a trip to a hospital for quick stomach pumping at best, or kill you outright at worst. Does this mean we should make all dishwasher soap liquids banned and outlawed? There is such a thing as common sense – a quality more and more people lack these days, yet for children who are still learning how this world works the idea of common sense is a strange one. Everyone knows that the best way to get a kid to do something is to tell him, that he is not allowed to do it. Combine that with the rebellious nature of most teenagers and you have a nasty and rather dangerous cocktail.

Most know that sniffing glue and paint is a thing. Serves to reason there are many other items out there that can be abused in a similar way, so let us have a look at few of them.

Drinking alcohol is so 2016, according to some. These days among kids trying to get drunk in a sneaky or unconventional way one of the best practices is to soak a tampon in alcohol and insert it into vagina or rectum. Likewise inhaling the alcohol vapor can serve to intoxicate oneself as well. Burning alcohol in a closed chamber and then rapidly inhaling the leftover vapor is a sure way to get drunk quickly and kill a couple thousand brain cells at the same time.

Not all of the kids have access to pure alcohol, thank god. Those that do usually get it by asking an irresponsible adult to buy it for them or they simply steal it from their parent’s minibar. For those that cannot afford such luxuries, as long as they get some hand sanitizer and use salt to reduce and distil the alcohol in it, can treat themselves to a highly concentrated and unrefined shot of alcohol. Blindness, chemically burned esophagus and organ failure are on the house.

It was discovered that teenagers have been hoarding cold medicine like Coricidin to achieve similar high to using PCP – a hardcore pain relieving drug. To be more specific, it not only relieves pain, it turns it off outright, by limiting your brains capacity to read your nerve receptors. Often the cold medicine comes in neat pre-portioned sachets and can be abused discreetly and efficiently. High on its active ingredient – dextromethorphan, they risk severe organ damage and even death in prolonged abuse cases.

A spice that most household kitchens will store for food preparation. Innocent really, until used on its own and in drastically increased quantities. Loaded with myristicin, this seemingly harmless spice can lead to hallucinations and increased blood pressure. Common effects of nutmeg overdose are coma and even death.

This is a rather popular and quite old technique to kill some brain cells and get high. “Chuffing” or inhaling pressurized air refresher through a cloth produces a similar high to being drunk, but lasts only a short while. This technique is also called “Breezing”, derived from the most popular brand of air freshener usually used for this activity – Febreze.

Kids and teenagers love to try out new things, especially if they feel it will make them more popular with their peers. While our classic understanding of drugs covers most bases, it is important to understand that there are plenty of regular household items that can be used to hide or mask consumption or simply abused by themselves to produce a dirty and much more dangerous high. Protect your loved ones and consider professional help, it is never too late to make things right.