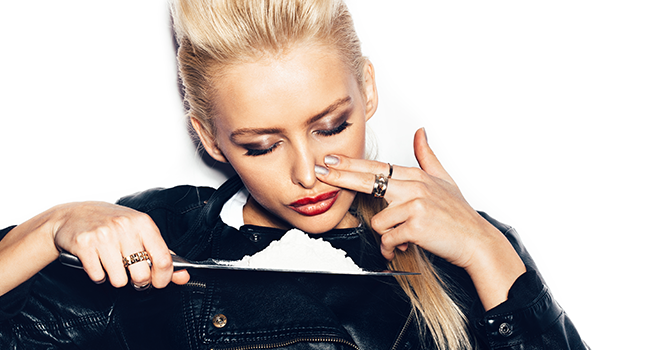 Cocaine: Glamourous, used by the rich and famous, loved by the masses, and still at the top of the drugs tree for those supposedly ‘in the know’.

The highs offered by this drug may be enticing, but as many have found to their cost, the lows can be far more harrowing.

We will consider these highs and lows along with the addictive qualities of ‘Coke’ later in the piece, but first let’s have a brief look at its origins and the different types available on the street:

Cocaine is derived from the leaves of the coca bush which is native to the Andes region of South America. It is offered for sale by dealers in the following forms:

Powder: This is the most common form of the drug and while the majority of users will snort it, it is also injected.

Freebase and Crack: This is basically the same thing although many state Freebase is a far purer version than Crack due to the different ‘washing’ process and chemicals used. Both forms are smoked.

Almost instantaneous effects are offered to those who smoke or inject the drug. Those who snort it are not far behind. This is due to its fast acting absorption via the nasal tissues.

Whichever way you choose to use, cocaine rapidly enters your bloodstream and has a one-way express ticket for the brain.

Once there it works by interfering with neurotransmitters. These are chemical messengers used by your nerves. Cocaine blocks norepinephrine, dopamine, serotonin and other messengers from being reabsorbed and this in turn causes a chemical build-up between nerves leaving the user feeling high.

What’s with the high?

There has to be something fairly special about cocaine for so many to crave it. While many claim the high’s offered are memorable, it must also be stressed that they are also very short lived.

So short lived that many need another line or injection every 30-60 minutes to keep chasing their initial feeling of euphoria. On top of this euphoria is a strong energy boost and increased confidence.

Any thoughts of sleep or food are put firmly on the back-burner while very strong cravings for more mean cocaine binges continue for days on end.

Another ‘benefit’ seen by users is that large quantities of alcohol can be consumed without having too much effect. This makes it is easy to see why so many find cocaine the ideal party drug.

What’s with the low?

Many find that the strong cravings they have for cocaine quickly lead them to heavier more regular use. It goes without saying that the longer cocaine is used the harder the comedown.

There are a whole host of negative feelings waiting such as anxiety, irritability and paranoia. Some are prone to panic attacks while others display erratic behaviour.

The downside doesn’t end there:

Because of the serious pressure cocaine use is putting on your body there are also some potentially serious physical health effects to consider.

Sustained and heavy use can affect your heart, brain, kidneys, lungs and respiratory system in a whole variety of ways. While many of these conditions will respond to treatment this is certainly not a given.

One major reputation that cocaine carries with it is the fact it is a potent aphrodisiac. While this may be true in the early stages of use, ultimately it can have the opposite effect.

Consistent use and abuse of the drug will have the brain working overtime with sexual thoughts and deeds, but the body is unable to follow through to completion. This is true for both men and women, while potential ejaculation problems are an added issue for men.

Please do not start something you will find difficult to stop:

It is clear that no one begins using illegal drugs with the intention of becoming addicted, but it needs to be understood just how addictive cocaine is. Those one or two lines ‘every now and then’ can quickly turn into a daily occurrence.

Your body and brain like what you are feeding it and a tolerance builds up. This tolerance means that you require more of the same to reach the same state as previously achieved.

Once you get onto the treadmill of regular and heavier use it is a very difficult thing to simply step off and walk away from.

Cocaine can ruin your relationships, finances and physical as well as mental health. It really is a drug best left alone.