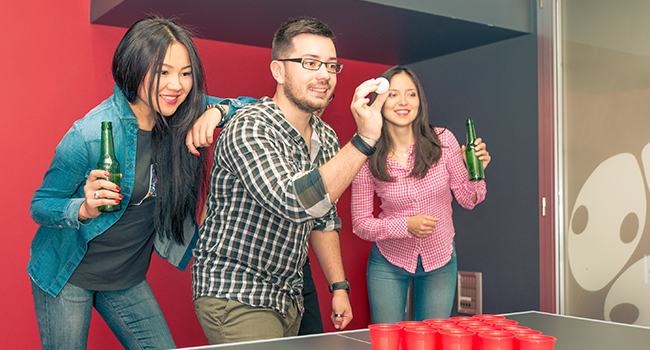 Drinking games are a regular feature of what is now called the binge drinking epidemic, but they are certainly no newcomers to the drunken scene.

They have been played in various countries throughout the world for centuries and are very effective in terms of speeding along the desired effects of those looking to get seriously hammered.

But for the purpose of this article we will concentrate on the modern day binge drinker and why drinking games are often part of this culture.

Before looking at why these games continue to stand the test of time while many participants are rewarded with wobbly leg syndrome, or just happen to slide unceremoniously off bar stools, we will consider 2 factors relating to binge drinking.

How long does a session of binge drinking last?

Many consider this potentially dangerous drinking session to take place over a full day, or during an intense evening of drink after drink. While this is often the case, it should not be forgotten that some binges last for several days, and those who seriously abuse alcohol have been known to continue for weeks on end.

Who is most likely to be involved in regular binges?

No prizes for answering this one correctly! It is most common for men who are moving from adolescence into early adulthood to embrace binge drinking. This group of testosterone-fuelled young men are ‘bang up for it’. They are out to compete as well as impress their mates, show off to their girlfriends or other girls, and let other males of a similar age group know they are potential rivals.

Before we get into more detail about competing males and binge drinking, let’s take a look at the longevity of drinking games and the types many indulge in which are aimed at getting their group ‘bender’ off to a rapid drunken start.

Countries throughout the world have used drinking games as a form of entertainment and inebriation for centuries. Some took them so seriously that rules officials were on hand and referees appointed to adjudicate on any disputes.

These guys had to keep strong control of events as things often turned rowdy and aggressive as participants descended into drunkenness.

More on this point relating to modern drinking games later, but suffice to say officials are nowhere to be seen nowadays.

What form do the modern day games generally take?

There is no shortage of choice. Games can involve tossing coins, rolling dice, quick-fire cards, memory or response games, speed and endurance challenges, as well as drinking games related to certain movies and sporting events.

The ‘penalty’ for losing each round can range from taking a sip of your own drink to downing whatever has been put in front of you.

There are many different versions depending on which country you live in and the type of company you keep.

One very simple example of this is the dice game: 3, 5, 7. A minimum of 3 players generally take part with a maximum of 6 or 7 to keep things rolling quickly.

Each player throws 2 dice in turn. The person who first totals ‘3’ shouts out a drink order of choice, this is usually a ‘shot’. The game continues until someone throws a total of ‘5’. This person pays for the drink, and the ‘lucky’ player throwing a 2-dice total of 7 has to down whatever waits in one go.

Take 2 separate groups of young men in the same bar with both groups intent on having their own binge to remember. Mix in a few rapid fire drinking games played independently by each group, give the 2 contrasting ‘ingredients’ a couple of hours to soak in alcohol, let them simmer with increasingly aggressive glares, and there is a good chance things will boil over.

Even assuming no trouble kicks-off while in the bar, things can take a turn for the worse once the bingers hit the fresh air. En-route to their next watering hole many will feel a bravado beyond reason, others aggression.

Besides fighting, those who are roaring drunk are prone to accidents and others will involve themselves with senseless vandalism. The list of potential binge problems is frightening and we have not even considered the potential health problems bingers are bringing upon themselves.

But, as we are coming to the end of the piece it seems appropriate to finish on just one fact that binge drinkers MUST heed. This is regardless of whether they indulge in drinking games or not:

Those who regularly indulge in this intense, sustained use of alcohol are causing brain damage at a faster and more severe rate than chronic alcoholics do.

Once a binge session is over, toxicity of the nervous system causes huge amounts of glutamate to be released. This over-stimulates the brain causing damage to, or killing off brain cells.

To make matters even worse this is not a one-off event. The more often you indulge in binge drinking sessions, the more this process is repeated with the result being ever increasing brain damage.