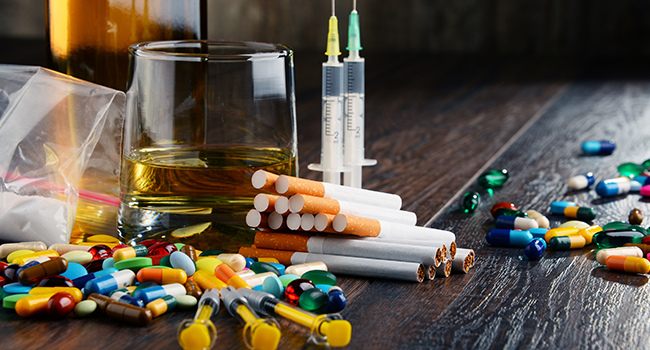 Welcome back. I trust you have read our previous article about drugs, what are they and how they affect our brains. If not, feel free to catch up on it right here.

Today, we will identify all the different types of drugs and why are they separated in such a manner. We will look deeper into their effect on human body, their after-effects, and results of long-term abuse. There are seven types of drugs that have been globally recognized and all drugs fall into one of these seven classifications. The basis of this classification is the parts of our brain that they interact with, and how they affect the brain chemistry. All of these seven can be further separated into so-called “uppers” and “downers”, but that is way too rough of an analysis, so without further ado, here are the seven types of drugs that plague addicts on a daily basis.

Seems like a good place to start. Considered by many as the least disruptive and dangerous of all drug types. Cannabis and its derivatives are not all innocent, however, they may not be as addictive as cocaine or do not destroy the careful equilibrium of the human brain chemical balance in such destructive way as heroin would, but there are plenty of issues that come with cannabinoid addiction. It generally impairs the user’s social life and ability to function at peak cognitive performance. Cannabinoids, specifically Marijuana is usually smoked yet it can also be eaten or brewed into a tea. It contains Delta-9 Tetrahydrocannabinol or THC as it is known by most. This is the active ingredient in Marijuana that makes the user feel relaxed, a sense of euphoria, increased appetite and reduced reaction times and motor functions.

These type of drugs affect the user in a myriad of different ways. The most prominent are their ability to change the perception of the user. Colors seem more vivid, tastes seem more pronounced and the person feels at peace and connected with people and things around him. Drugs such as Peyote, LSD, and Psilocybin-containing mushrooms are all considered hallucinogens. In high enough doses these drugs may cause the user to hallucinate, see things that are not there. The user to a bystander may seem calm and reserved but these drugs usually stimulate thinking and idea generation. A person high on hallucinogens can stare at a blank wall and marvel in its beauty.

A chemical our brains produce naturally called “Serotonin” is actively used up in conjunction with this type of drug. It correlates to how friendly or moody a person is and also can impact their appetite, body temperature, and various social behaviors. It is not unheard of to witness a person high on hallucinogens embarrassing themselves in public while doing something that they feel is completely normal and adequate.

This is a very brain damaging class of drugs. Usually, they are not even drugs but regular household items repurposed for their effects when inhaled. Paint thinner, gasoline, hair spray and much more canned and pressurized everyday products. They induce euphoria and short bursts of relaxation but is very dangerous as they directly starve the human brain of oxygen and saturate it with chemicals that are meant to clean rust or as an adhesive. Long term users turn into so called “zombies” because they erode away their own brain and when high are very lethargic and generally out of connection with the world around them.

Probably the most widely used type of drugs are the CNSD type drugs. They include alcohol, barbiturates and various anti-anxiety drugs such as Thorazine, Xanax, and Valium. They depress or slow down your bodies central nervous system, slowing down reaction time and severely impairing motor functions. Vestibular apparatus in your brain is no longer able to maintain equilibrium and the user suffers from an inability to hold their balance and gave general difficulty walking and maintaining a coherent thought. Slurred speech, blurry vision and impaired ability to perform precision tasks with their hands are also a very common result of CNSD type drug use. The human body, liver, in particular, is very adaptive to this kind of drugs, which is both a blessing and a curse. Over time it becomes more efficient in filtering and detoxifying the body of these substances and build up a tolerance to them. This means that an addict needs more of it each time it is used, which sadly can result in critical liver failure and death. The lethal dose still remains the same, it’s just that the effects a drug user is expecting are not as prominent anymore so he uses more and overdose is a very real threat.

These type of drugs directly interact with your opioid receptors in your brain. They are also called Narcotic Analgesics and have been used throughout history as sedative and pain relief medicine. This class includes such drugs as Hydrocodone, Opium, Codeine, OxyCotin, Morphine and Heroin. There is a long list of prescription drugs that contain opiates or their active ingredients, so listing them all here would be madness. These drugs provide the user with sleepiness or drowsiness as well as intense pleasure and contentedness with the world around them. The so-called opium dens used to be very popular, it was a place for rich and wealthy to smoke opium pipes and lounge on mountains of pillows dreaming their life away. These drugs are the usual choice of people running from something, trying to escape life’s harsh realities.

A complete opposite of CNSD type drugs, these elevate blood pressure and release chemicals that make you more awake and aware. The user of this type of drug is usually seen hyperactive and can not focus on something for a long period of time. Good examples of these drugs are Cocaine, Methamphetamines, Ritalin, and Crack. They stimulate the user and provide intense waves of pleasure and a general feeling of invincibility. This drains the energy of the human body and come-downs from these drugs are usually very hard and feel like the worst hangover in the world, accompanied by intense fatigue.

Last, but definitely not least, these type of drugs were also used as a type of anesthetic or sedative. They work in a different and quite a bit more intrusive way to combat pain. Where Opiates suppress the pain, DA type drugs cuts it off completely. Drugs like Dextromethorphan, Ketamine, and PCP are few from this class. There have been cases where a drug addict high on PCP has been charging a police officer with aggressive intentions, been shot numerous times in the chest and abdomen but is still able to continue the assault. Until blood loss and organ failure catches up and no amount of pain-blocking drugs can keep a person up. Dextromethorphan or DXM for short can be found in over-the-counter cough syrup and cough suppressing medication, which makes it very accessible and even more dangerous.

This concludes our overview of what drugs are, what types of them are out there and how they affect you and your brain. If you identify yourself as an addict of any one of these drugs, seek help. It is never too late to find a reason to live. Drug addiction leads only one way – down. With the help of professionals and like-minded individuals, anyone can climb out of the abyss of addiction.