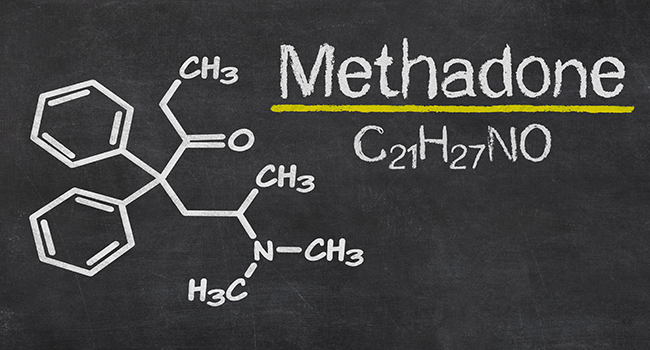 Dependent upon where you live it has a variety of street names. Think ‘dollies’, ‘done’ ‘junk’ or ‘jungle juice’ to name but a few.

It is a synthetic opiate pain reliever that offers long lasting effects. It works by acting upon the brain’s opioid receptors in a very similar way to heroin or morphine, but chemically it is different.

Similar to heroin and morphine with one major difference:

When taken this drug offers similar feelings and highs to heroin and morphine, but very importantly it offers far longer lasting effects.

Because it is released more slowly into a user’s system it does not wear off in a couple of hours, indeed one ’hit’ can last between 8 hours and 2.5 days. The length of effect depends greatly on the dose taken and the tolerance of the user.

Why is it used as a substitute for heroin?

As just mentioned, methadone offers similar effects to Smack, but these effects last far longer. It would therefore seem very sensible that those trying to kick their heroin habit use this drug as a substitute.

This is because a heroin addict will only need to take a daily dose to suppress their heroin cravings and withdrawal symptoms while coming of it.

So, what’s the problem?

Because the dose and feelings last far longer than heroin the theory is that it allows addicts to deal with their heroin addiction issues and kick their heroin habit.

The problem is that regular use of this substitute is very prone to causing as much of a physical and psychological dependence as heroin does.

Basically you are substituting one debilitating addiction for another, and more importantly, many drug professionals now believe that methadone detoxification is as difficult, if not more difficult to achieve than detoxing from heroin alone.

Withdrawing from ‘Dollies’ produces similar symptoms to Heroin withdrawal, but in many cases these symptoms are more severe.

During the initial stages the withdrawal may feel like you have the flu. You will feel tired and restless. Anxiety will increase as will sweating. Muscle aches and pains are also extremely common.

As your withdrawal continues the likelihood is you will feel very nauseous and many vomit. They will have body cramps and diarrhea.

It must be said that withdrawal symptoms vary from person to person and in severity. This is very much down to the addict’s current state of health and how long they have been addicted.

Such advanced withdrawal symptoms are severe and can affect you for several days this is a major reason for considering inpatient rehabilitation services.

Staff at such residential rehab establishments are geared towards helping you through this very trying period, and such support will greatly reduce the chances of a quick relapse.

How long before withdrawal symptoms kick-in?

Methadone withdrawal symptoms kick-in far later compared to other opiates. They will usually start within 30 hours of last use.

It is important to understand that while the withdrawal symptoms take longer to kick in, they will be no less severe.

Why do so many avoid withdrawal?

As can be seen from the above, withdrawing from this drug is not a pleasant experience and a major reason addicts choose not to go through the withdrawal process is fear.

Not just the fear of the withdrawal symptoms, but a fear of how they will possibly cope in the future without their regular ‘fix’.

While this is understandable, it is extremely important that an addict admits to themselves that this drug is not only ruining their life and that of those closest to them, but there is a strong possibility that heavy, continued use will lead to death.

Surely a period of pain and unease during withdrawal is a far more preferable option than ending up in a morgue.

The longer an addict delays methadone detoxification the harder it becomes, and the less likely they are to do the sensible thing and seek the help of professional rehabilitation services.

Beware of overdoes during any relapse:

It must always be remembered that there is a chance of relapse once a person has come through the withdrawal process.

Having said that, it is also extremely important for anyone who goes into relapse to understand that similar size doses taken when ‘clean’ to those taken when addicted can be lethal.

This statement should constantly remain uppermost in every recovering addicts mind if and when temptation to begin re-using surface, and make no mistake, such temptations will exist, but they must be resisted.

The reality is that getting back on this highly addictive drug after detoxification greatly increases the possibility of breathing difficulties, changes in heart rate, sedation that leads to coma and ultimately death.

There are a host of options to assist. These range from seeking help from your health practitioner through to an inpatient stay at one of the highly professional addiction recovery resorts that offer care, assistance and teaching. This support will help greatly in terms of helping the addict for a future that is free of this highly addictive drug.

Do NOT let fear of withdrawal thwart your recovery efforts:

It is a very simple thing to say: The only way to escape the depressing and often debilitating effects of a methadone addiction is to stop using it.

It may be simple to say, but it is harder to do. However that should not stop an addict from taking the brave decision to withdraw.

Fear of withdrawal should NOT stand in the way of your recovery. Yes, such withdrawal can be difficult, but the long term benefits you will gain far outweigh the misery you will go through if use of this drug is continued.