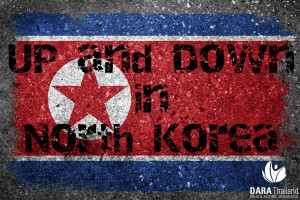 North Korea, known as “the Hermit Kingdom” for its insularity is experiencing its own drug epidemic. Amidon addiction is on the rise as more citizens chose it as their new “drug of choice,” following a predictable curve after years of methamphetamine use (speed burnout is often followed by opiate addiction).

Amidon is a synthetic opiate, originally invented by the Germans in 1937 in anticipation of the need for a reliable source of pain medication as the war machine cranked up. It is known in the US that methadone, which has been used to wean addicts from heroin dependency, leads to an increase in methadone addiction, which in turn results in around 5,000 deaths each year in the US, more than the number of heroin deaths.

In the 1990s, the North Korean government managed the manufacture of opium, meth, and other drugs, but the purpose was export in order to finance government operations. Since then, the drug business has privatized. Abandoned factories make ideal clandestine labs, and entrepreneurs—along with unemployed scientists and technicians—have taken over. Last December, a conspiracy to smuggle 220 pounds of methamphetamine was thwarted by US authorities; the defendants claimed that the shipment originated in North Korea.

Although usually severe in its policing of its citizens, North Korea has shown minimal interest in dealing with drug users. Meth use is as casual as drinking tea, opium paste is prescribed for pain relief, and marijuana is legal and frequently grown at home. In a country where wholesome recreation is minimal, choices are limited, and food is scarce, it is not surprising that drugs have become popular. Western observers, with limited access to information, will have to watch from afar as Amidon addiction plays out in a nation lacking a treatment infrastructure.