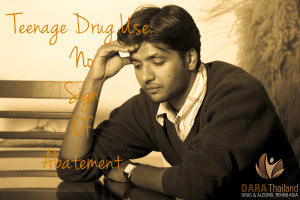 According to statistics, the US leads the world in illegal drug use, but the problem is pervasive throughout the globe. In the Punjab region of India, for example, drug use has ramped up among young people in the last decade, and the number of students graduating from post-secondary schools has diminished. A report published in 2011 showed that teenage drug use is endemic, with 1 ½  to 2 million young people caught in the cycle of addiction. Iran is experiencing an expansion of heroin use, with over 7o% of its addicts (estimated at between 2 million and 5 million) aged 18 to 25. In Russia, heroin kills 80 people every day, and most of its 2 ½ million addicts are between the ages of 18 and 39. Cheap heroin from neighboring Afghanistan has flooded the country since the early 90s.

Treatment is available in various forms throughout the world. Alcoholics Anonymous was established in Russia in the late 80’s, but it’s effect on drug use there is questionable, and treatment for drug addiction is hard to find. The Akal Academy of India represents an attempt to deal with the problem there and has shown success.

In the US, teenage drug use has shifted its trajectory. What once started with alcohol and marijuana experimentation and then might have taken years to progress into addiction now accelerates quickly to dependency via the abuse of pain medications. The era of cocaine as a party drug to augment drinking is over, and the use of pills such as Oxycodone, Hydrocodone, and Dilaudid is now prevalent among teens. Also popular is abuse of tranquilizers like Xanax. The arc to dependency is rapid, and the move to snorting or smoking heroin, which is less expensive, is a logical next step in the progression.

Worldwide, the problems attendant to teenage drug use are similarly tragic: overdoses, neglected health, HIV and hepatitis, criminal activity, incarceration, interrupted education, loss of productivity, and alienation from loved ones are consequences that know no boundaries.