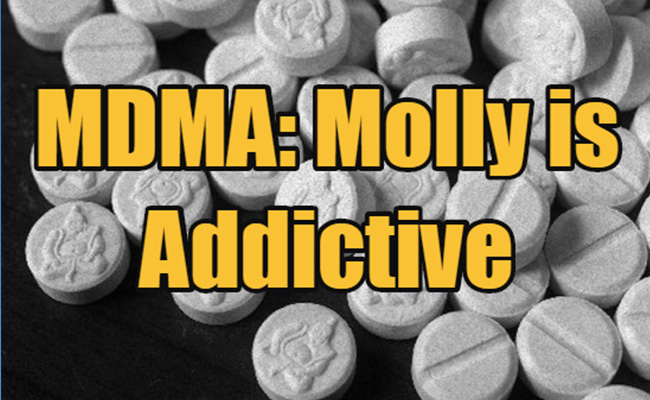 Molly, or MDMA as it is known scientifically, became enormously popular as the so-called club drug. With its tendency to fuel high energy bursts and feelings of wild euphoria, not to mention the feelings of happiness with the company of others. It is small wonder that molly became so popular among those who feel the need to move and dance for hours on end.

MDMA was first synthesized in 1912 by a German pharmaceutical company to be used as an appetite suppressant, the drug became extremely popular in the “rave” crowds during the 1980s and 1990s. It was classified in the United States as a Schedule 1 drug after it became so widely abused.

As stated above, molly produces feelings of euphoria and high energy. It also seems to induce feelings of connectedness with others. These effects obviously make up the appeal for users. However, there are some real side effects even while using the drug. Users may experience anxiety and paranoia. Some people experience nausea, blurred vision, and hallucinations. The more dangerous effects include high blood pressure and elevated heart rate. Men may experience erectile dysfunction. The party drug is not all party, it would seem.

Coming Down From Molly

The come-down from MDMA can be horrible. People describe a phenomenon called “Suicide Tuesday” in which people feel deep depression and severe anxiety as the high of molly wears off and heads in the opposite direction mentally and physically.

The more far-reaching problems with molly can be fatal. MDMA can interfere with kidney function resulting in kidney failure. There are also long-term memory and cognition impairments that result from excessive use of MDMA. Even in the absence of health problems directly as a result of molly, may users have suffered severe problems that came as a result of the dehydration associated with the drug and the high intensity activity usually associated with using molly.

Since molly is illegal and is essentially a street drug, is often cut with others substances. These may include simple caffeine. They may also include more dangerous substances like methamphetamine and cocaine. The dangers here are obvious and well-documented.

As of now, the research on molly indicates that it is not physiologically addictive. However, this is deceptive. As with anything that is habitually abused, the feelings and behaviors associated with the drug can become an addiction in themselves. That there is no evidence of physiological dependence does not in any way indicate that a drug is safe. People become dependent and addicted to using molly in the same way that anyone becomes dependent on a chemical used as a crutch for more productive life coping mechanisms.

Given that molly is so often contaminated with drugs which are physiologically addictive, it is simple foolish to operate as if there is no danger of addiction to molly. It is a substance like any other substance. Prolonged abuse leads to problems. What is more, molly has not been subjected to the same level of scientific scrutiny as more commonly abused drugs. The relative “safety” of MDMA is simply not known.