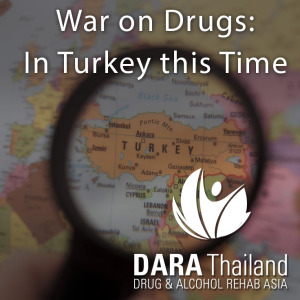 Last month, President Erdoğan of Turkey gave a speech at International Symposium on Drug Policy and Public Health in Istanbul, in which he claimed that drug addiction is the result of a lack of moral values, and that religion is the best way to counter both problems. He went on to equate drug trafficking with terrorism, stating that his government will treat drug traffickers in the same way that it treats terrorists, and that a war on drugs is the appropriate stance for enforcement. A week earlier, the Turkish prime minister and health minister delivered a joint statement declaring a war on drugs.

In recent years, Turkey has experienced an escalating drug problem, and the government responded in June by increasing penalties against drug traffickers. In 2012, Turkey prosecuted over 130,000 people on drug charges, more than four times as many as in the previous year. A large percentage of these were young people smoking marijuana.

Poppies are a traditional crop in Turkey. Under the Single Convention on Narcotic Drugs of 1961, it was classed as a “traditional opium producing country.” In the following years, Turkey reduced its production and eventually banned it. Then, in 1974, it introduced a licensing system for cultivation of poppies for medicinal purposes.

Because of its geographic position at the heart of trade routes going both east–west and north–south, Turkey has long been central to international drug smuggling. In the mid-90s, there was a scandal involving the Turkish government, its armed forces, and organized crime. The government had been economically impacted by the loss of trade due to the Gulf War and the Iraq embargo, and members of the government were complicit in allowing large amounts of heroin to flow westward into Europe.

Although mitigating drug use and smuggling is a legitimate challenge for the Turkish government, political incentives to conflate trafficking with terrorism exist. The Kurdish separatist movement known as the PKK is accused of financing its operations with money gained through the drug trade, and to the extent that it can be called a terrorist organization, fighting its source of funding could be fairly considered part of Turkey’s war on terrorism. However, the social implications of the “war on drugs” have been shown to be generally negative in the West, and the criminalization of recreational drug use results in the disenfranchisement and alienation of mainly young people who might otherwise be productive citizens.