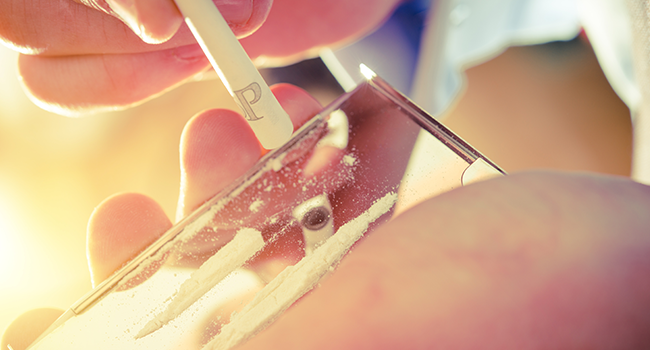 Cocaine goes by many street names. A few examples are; Coke, Snow, Toot, White and Charlie. Whatever ID you give this drug it should be made very clear that it is one of the most highly addictive drugs on the planet.

While freebase and crack are both highly addictive forms of the drug, powder cocaine is still seen by millions the world over as the most ‘acceptable’ form of purchase and use.

We will concentrate on the powder form and explain why it is so ‘moreish’, and why many find the idea of ‘knocking another line up’ comes knocking on their brain more and more often until the need to feed that cocaine habit becomes insatiable.

Strength is the luck of the draw:

Do not believe any dealer that tells you the wrap in your pocket is guaranteed to be potently powerful. This is because the drug is mixed with a wide variety of substances including lidocaine which is used for its numbing effect.

Such an effect tricks the user into thinking the deal they have just scored is far stronger than it really is.

Charlie is a very powerful stimulant that gives a very pleasant high. Users regularly report a sense of euphoria, of feeling on top of the world and bursting with confidence. It also lowers inhibitions which means that an ‘anything goes attitude’ can become the norm.

While all of this sounds positive it must be understood that the major effects received from a line of Charlie wear off anywhere between 30 minutes and 2 hours after the last snort.

The obvious answer to the lowering of these feelings is to knock another couple of lines up. At the time this solution seems like the most natural thing in the world to do. Users will continue to snort on while partying or socialising without comprehension or care of the clock.

Your mind and body take to cocaine with ease. They find the effects very pleasing indeed. They also quickly build up a tolerance to the drug. As this tolerance increases so does your dependence.

The problem with this tolerance is that to achieve similarly expected highs to previous ones a user needs to take more of the same. This continual increase of use is speeding your slippery slide into cocaine addiction.

Becoming dependent upon any drug means that a person cannot function normally without it. It also means that if they abruptly stop use then some pretty nasty withdrawal symptoms will let them know of the fact in no uncertain terms.

The good news is there are no physical withdrawal symptoms associated to withdrawing from cocaine such as nausea, body cramps or shaking that are common to those withdrawing from alcohol or methamphetamine.

The bad news is there are some severe psychological withdrawal symptoms that can last for many months after a user has quit the drug.

Initial symptoms include feelings of intense tiredness and a constant weariness that affects both the mind and body. Anxiety, irritability, mood swings and depression are all par for the course while many will also suffer overly from agitation, increased suspicion and paranoia.

One withdrawal symptom common to all:

Every person who has become dependent upon cocaine and attempts to stop use abruptly will suffer from one very powerful withdrawal symptom. That is an extremely intense and powerful craving for more cocaine.

It is this craving that will generally break the resistance of those trying to quit the drug without professional rehabilitation assistance.

Continued use of Charlie will break you in more ways than one:

We stated at the beginning of this piece just how addictive cocaine is. This fact should not be underestimated by anyone.

Continued and increased use will empty your bank balance, destroy relationships and distance you from friends.

Another unwanted outcome can become a frightening reality. If, like many coke addicts you combine this drug with alcohol and/or other illicit substances there is a very good chance that it will put you in the mortuary long before your time.

Don’t let it destroy your life:

The slide into cocaine addiction can be a rapid one. If you find your use is increasing on a far too regular basis, and you have tried quitting yourself but failed, please take the brave and sensible step of contacting a rehab establishment to discuss with one of their knowledgeable councillors exactly what treatment is available.

It won’t be an easy journey out of addiction, but it is an eminently achievable one that has seen millions of men and women come through cocaine dependence stronger, more determined and wiser.