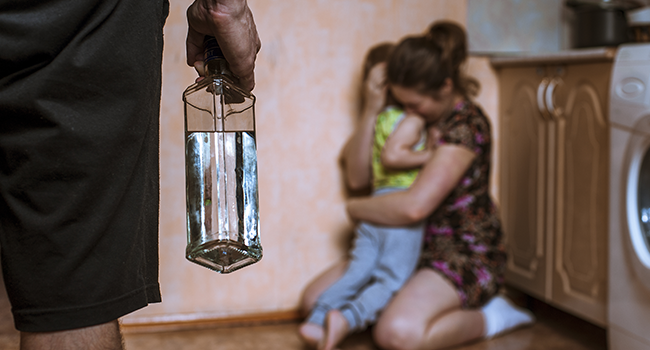 It is common knowledge that alcohol affects people in many ways. Some are relaxed and calmed by it, others far more outgoing and amusing, but a darker side to the effects of drinking too much alcohol comes to those in the form of aggression.

This can have frightening and damaging consequences for themselves and others involved. Examples of this are the fact that bar brawling and street fights are common traits amongst those who explode into violence when drunk.

We will consider some of the reasons that cause so many to ‘turn’ when under the influence of alcohol, and then look at a terrifying effect of such violence; one that occurs in the home, and is made even more hideous by the fact that in the majority of cases the perpetrator goes unpunished.

Why does alcohol cause an aggressive streak in some?

Exact reasons for increased aggression are not fully understood, but it is known that people who have aggressive tendencies when sober are very likely to have their levels of aggression pushed even higher when drinking alcohol.

It is also believed that alcohol disrupts the brains cognitive function, so even those who are not naturally hotheaded change their way of solving problem situations.

Without alcohol a potentially troublesome incident would quickly be turned over in the mind. Full consideration would be given to avoiding confrontation rather than facing it head on. With alcohol onboard this thought process leans heavily towards aggression as a resolution to the situation.

One very sad reality for those who are on the receiving end of such aggression occurs in the privacy of a home environment.

This is one of the most hideous, cowardly forms of alcohol aggression. Largely due to the fact that the aggressor knows the chances of being taken to task for inflicting such violence are slight.

That is unless they really overstep the mark. We will touch on this point towards the end of this section.

While women are responsible for incidents of domestic violence this is very much a ‘male thing’.

A typical scenario is when the male partner in a relationship has been on a drinking spree and comes home whenever pleases, he is drunk and already on the defensive before the front door is closed.

One ‘wrong’ word from his partner, who may well be rightly frustrated at the late arrival and state of him, or even such ridiculous complaints as “dinner is not ready”, or a room in the house is out of place leads to two types of domestic violence.

Some very wrong, harsh and abusive accusations and threats will be thrown, these will be in a threatening and aggressive tone that will rise as the vitriol increases.

To press home their point and show just how strong they are, this abuse can be followed by a slap or a flurry of punches and kicks.

These cowards are generally sly enough to understand that too heavy a beating will leave bruising and wounds for others to see, so will inflict this injury on parts of the body that are generally covered such as the stomach, ribs and upper legs.

While it is generally their partner that takes the brunt of this violence it is not unknown for children to receive a beating for good measure.

Law enforcement are reluctant to become involved in domestic disputes unless they get completely out of hand, or the victim files a complaint.

With the victim already fearing for their safety it is very unlikely they will pick up the phone to call for police assistance, or for them to go to the authorities in the aftermath of such an incident.

Because the aggressor is so drunk they may not realise the actual physical damage and injury they are causing. If this is the case, then the victim will need urgent medical treatment.

While hospital staff will treat any injuries, it is also their duty to report such incidents to the police. When the police arrive to take a victim’s statement it is then hoped they will raise a complaint.

The problem here is that many victims completely understand the reality and consequences of pressing assault charges against a partner. They know for sure that such action will simply lead to further beatings and misery, so will decline.

A word of advice for those who regularly use violence against their partners:

As a matter of urgency you should seek professional help to stop drinking while also attending anger management courses.

An alternative that many would deem the perfect solution is for you to go out on another heavy drinking session. Once tanked up and full of that alcohol aggression go and find someone stronger and quicker than yourself and pick a fight with them.

You will then FULLY understand just how frightening and damaging your cowardly domestic violence antics really are.