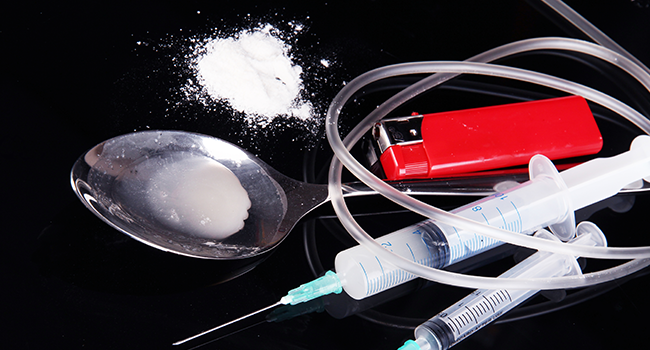 For the millions of people who have never developed a taste for recreational drugs the attraction will be alien to them, and while they may not be well-versed in the different drugs available and their effects it is guaranteed they will have heard of Heroin.

This drug is one of the most publicized and feared illegal substances on the planet thanks to its highly addictive properties.

Later in the piece we will take a look at some of the common ‘tools’ users will have in their lockers, but let’s start with a quick explanation of what heroin is and the reason it and similar drugs were introduced as solutions to addiction problems that ultimately made matters worse.

This highly addictive and illegal drug is made from the resin of poppy plants. Other drugs in the same class made from this resin are opium and morphine.

The pod of a poppy flower contains a milky, sap-like opium that is extracted and refined to produce opium. It is then further refined into different forms of heroin.

Trying to square the circle of ‘poppy plant’ addiction:

During the mid-1800’s opium addiction was a huge problem in the United States. Medical authorities went in search of a solution and chose a supposedly less powerful and ‘non-addictive’ treatment for those addicted to opium.

This solution was morphine. Fairly rapidly it was found that addiction to morphine was an even bigger problem than opium addiction.

In the early 1900’s the medical authorities turned to another ‘non-addictive’ drug to help those with morphine addiction, this was to use a drug that was first manufactured in Germany in 1898; Heroin.

Unfortunately, heroin proved to be even more addictive than morphine, so to counter heroin addiction yet another ‘non-addictive’ substitute was tried. This was methadone.

Yes, you have guessed it! This methadone solution yet again proved that the treatment drug was even more addictive than the drug which originally caused addiction.

There is a moral there somewhere, but we will leave that for you to decide!

While the drug is smoked it is most common for regular users to inject. Here are some of the ‘tools’ used, and if you suspect a loved one is indulging these could very well be key indicators.

It is important to understand that these items can be stored easily in a fairly small locked box or container and will generally be kept in the user’s bedroom or bathroom.

Let’s start with the blindingly obvious:

As we mentioned, injecting is by far the most popular method of use, so finding a syringe and hypodermic needle in the possession of someone who has no medical reason to possess one should raise major red flags.

‘Gear’ to complement the needle:

The syringe and needle will generally be kept company by a spoon, some type of filter; examples are a cotton bud tip, filter from a cigarette or perhaps a micron filter. If using the type of heroin that needs heating there will be several lighters around, and quite often a candle.

To help locate a vein more easily a belt, cord or rope is often used. Taking the arm as an example, the user would simply tighten the restraint around the arm and the reduced blood supply this causes will quickly show up veins.

There are a couple of common methods for those who smoke heroin:

Many who smoke heroin use glass pipes with bulbous ends, or metal pipes that are similar to those used by Methamphetamine users. Other makeshift ‘pipes’ can be made from household items, so do keep an eye out for anything ‘pipe’ shaped around the house.

Heroin can be smoked using 2 pieces of aluminium foil. This is not such a common method, but if your rolls of kitchen foil start to disappear then it could be a sign the user is smoking the drug in this way.

Two pieces of foil are used. One acts as a board to hold the heroin over a flame; this will be a flame from a candle or a lighter, then another piece of foil is shaped into a ‘straw’ to inhale the vapours. Rolled bank notes or empty plastic cases from ballpoint pens can also be used as the inhaler.

Heroin is often packaged in small, self-sealable plastic bags that could well be decorated with colourful artwork or specific logos, or coloured balloons that are semi-inflated but not tied.

What to do if you suspect use:

While the natural reaction of many will be to fly off the handle, this is really not the initial approach to take.

What you need to do is learn as much as possible about the drug, its effects, ways of use and methods of treatment that can help a user kick their habit.

This will be a very difficult time for the user and yourself, but with knowledge as well as advice from rehab specialists you are increasing the chances of helping those dependent upon the drug.

By understanding and explaining what heroin is doing to their body, why it is doing it, and what short as well as long term damage they are causing themselves will give you a head start in helping them understand the seriousness of the situation.