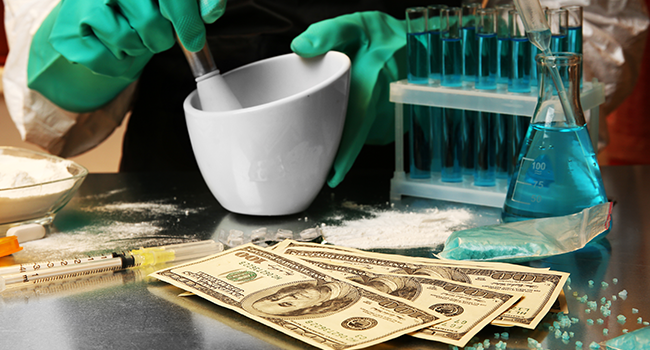 It is unlikely that those who dabble with meth or it’s even more addictive relative; ice, consider just where and in what conditions this drug is produced.

Here are a few facts as to the damage this drug is doing to those who produce it, those who consume it, and the potential danger posed to those who have nothing whatsoever to do with it.

While there are undoubtedly some very large production facilities the world over we will focus on the many smaller ones which are established in suburban and rural areas.

These home “Laboratories” are to be found in garages, derelict buildings, unused outbuildings, and more worryingly rented rooms, apartments or houses in busy neighbourhoods.

Meth is not that difficult to produce. Once a regular quantity of ephedrine or pseudoephedrine are secured there are then a whole variety of other ingredients which can be combined.

The majority of these key ingredients are not only toxic they are highly flammable, but are readily available for purchase from many outlets such as chemists, supermarkets and hardware stores.

Common ingredients include drain cleaner, rubbing alcohol, lithium contained in batteries, anhydrous ammonia, red phosphorous, de-icer, lye and iodine, but other ingredients can be added or substituted dependent upon what is on hand at the time.

Those who are regularly using meth should consider exactly what such substances can do to their long term physical and mental health.

Those responsible for cooking meth are rarely skilled in chemistry and usually heavily addicted themselves. Their lack of knowledge relating to chemical reactions and their impaired mental capacity due to the influence of the drug often means the production process is prone to error and danger.

They may be vaguely aware that when these ingredients are combined there is a potential for a highly explosive and corrosive solution to be created, but due to their desperation and need to produce large quantities of the drug these thoughts often take a back seat.

What they are unlikely to be aware of is the fact that breathing the toxic fumes created during production can cause irreparable harm to their nasal passages, lungs and brain.

A catastrophe waiting to happen:

The unstable minds of those working in these kitchens coupled with the potentially lethal combinations of ingredients is a catastrophe waiting to happen.

Many cooks will suffer severe burns caused by ingredients bubbling over or by spillages caused while transferring ingredients.

There is also the possibility that due to the highly volatile nature of ingredients used that explosions will occur. Such a disaster can result in the demolition of the property and death to those inside.

Damaging by-products of this process:

For every pound in weight of finished meth there is between 5 and 7 pounds of toxic waste left behind.

Do not think for one moment that those involved in production will consider how to safely dispose of such waste. They will simply dump it on waste ground, in nearby streams or lakes or leave it behind before moving onto their next location.

If these toxic chemicals filter into the water system they can contaminate drinking water, there is also a possibility that toxic vapours can be absorbed into flooring, air vents, walls and furniture of rented homes. Obviously this leave any future, unsuspecting tenants at risk from health problems that such residue leaves.

Signs of an active meth house:

It is clear that most meth users are not producers, but those who purchase this highly addictive drug should be aware of their contribution to the potential damage such use is causing.

They should also be aware that it is not difficult for authorities to be alerted to the fact that a residential property is being used for production.

Once surveillance is established this will include watching dealer and customer activity. If you are identified as purchasing the drug, then there is a strong likelihood prosecution will follow.

Common signs of a meth house include those who are resident being unfriendly and often paranoid towards neighbours, the unnecessary reinforcement of doors and windows, and the fact they rarely put rubbish out for general collection.

Other pointers include unemployed tenants who seem to have plenty of money, those who pay rent in cash and the fact that the house is very quiet during the day but receives excessive foot traffic during late hours.

There is help that will enable you to walk away from meth use:

If you are in the very early stages of meth use there is a strong possibility that by changing your mindset and stopping use immediately you will be able to walk away from use unassisted.

If, as is the case for many, this wickedly addictive drug has currently got the better of you simply ceasing use is not a viable option. The pull of the drug and an overwhelming desire to continue use needs to be addressed with the help of professional drug rehabilitation services.

These establishments are well versed in the process of addiction recovery and are there to help. By taking advantage of this assistance you will be on the road to leaving meth and its devastating effects exactly where it belongs; behind you.